Spring Equinox in the Southern Hemisphere brings unpredictable, sometimes snarling, winds. The winter, good riddance, had been just as temperamental with frequent wild squalls highlighted, in anger, to the Owl and the Cat who live on a boat. With a gale forecasted the pair batten down the hatches and wait on anchor for a few days before finally leaving Fitzroy to circumnavigate the island of Great Barrier/Aotea.

The winds at 50 knots lurch the boat to varying angles and pull hard on the anchor chain like a menaced eyed dog straining on a leach. The Cat on the outside remains calm and reads a book. They are in a safe and protected spot, but inside her brain twitches with memory of the tornado. She is not really reading the book. One dark night, a few months previously, while sitting alongside a dock, a whirling mass of energy made a tracked course the width of a two lane road through the marina and city harbour side. Darth Vader remained 200m away but was felt by occupants inside to have been picked up and pushed into the sea by a large god like hand. Other boats were not so fortunate, a few were picked up and dropped sideways on the docks then put back in the water and sunk with smashed hatches. A catamaran flew up in the air like a box kite and landed upside down, a huge super yacht laid over to 90 degrees breaking it’s mooring lines. A piece of sheet metal lifted off a building site was seen in the break of day limply hanging around a mast’s stay as if it was made of cotton. Small proofs of an unstable climate.

The calm followed the storm and the Owl and Cat on a Barrier blue morning made haste to sail and leave Fitzroy and the transfixing torpor like state they had found themselves in. They needed to move, make tracks, venture onwards, forwards with purpose… After a few nights in Tryphena, a destination desired for it’s scallops, sails were hoisted again and they departed for the back side. The Eastern side of the island is more exposed to large ocean swells but the weather forecast looked fine. However, the surprise came for them like a laughing jack in the box when they turned the southern corner and punched into a head wind with 3m waves. The forecast, of course, is not always right and the Cat wandered why on earth they had ever wanted to go to sea..just for a short while.

A number of bays, or days, or ways of the back side:

-The first bay on the back side was plentiful with seaweed which they stole off rocks and ate sautéed with a spoon (recipe below). The Owl smiled sweetly and licked his lips but his stomach was in a state of gloom.

-The second bay was sand whipped and stormy with the anchor dragging under a dead moon and 75 knots being felt at noon.

-The third bay they were roused by one slow shark who led a pod of Orca whose jet black dorsal fins disappeared too soon.

-The fourth bay was without any rhyming ‘oons’ but it’s sky was painted with a brilliant electric rainbow. An intense two dimensional fabrication, a charlatan, on a dark ocean sky.

-The fifth bay had the Owl and Cat scrambling up a stream over rocks, climbing slippery gorges to a waterfall where the laundering of dirty socks took place. The singing of “Wash those socks on those rocks” was heard by a Tui sitting in a Puriri tree above whose eyes rolled in disgust.

-The sixth bay was dominated by two young brothers with a gun who were looking for a pig to kill. The Owl and Cat stayed off the shore and didn’t think about the day before their wedding day.

-The seventh bay, under the sea, there was a glinting hook without any bait on hanging motionless in the deep azure. A school of laughing full bellied snapper, in absolute hysterics, falling over themselves in humorous scaly delirium, circled the hook. The Owl and Cat were practicing some more sustainable fishing (where by you feed the fish rather then eat them).

The adventures around the backside were over and the Dark Lord made her way back to Fitzroy, for want of a flat anchorage, with the aim of achieving further boat jobs. When not doing odd jobs, climbing up the hills, exploring tributaries and having the odd success at fishing, time passed. The Cat took to diving with her spear in the mussel farms but ended up just looking around and chatting with a passing seal. The Owl made a friend called Pat, a duck who he invited to stay on the duck board (the back low platform of the boat) tempting him in with handfuls of oats. He remarked often at how well behaved Pat was and how he did his business in the sea…until one night. The couple woke in the morning to find the cockpit absolutely filled with the ducks business. He had had a great time in there.

Fitzroy emptied of boats and more winds came. It was just the hardened few here now, no day trippers. The ones who hunkered down and looked out on the mists blanketing the enigmatic hills. The ones who did without showers and who rowed to shore for eggs in wet skies. The Owl and the Cat, A grumpy Badger and a Bat and an elegant Ganet, who had once been a man and now was a women who rowed in an evening gown and blonde wig. That was the lot of them here for now.

So now we find ourselves on a calendar, at an empty square after many boxes filled with x’s, of a month and a day spent at Great Barrier Island/Aotea. The Owl’s stomach’s gloom had now reached his head and in an outburst on this quiet morning expressed “We cannot survive off seaweed forever, I want mince and I want quince !” The Cat stayed firm in the belief of being able to survive off seaweed but did secretly dream of Honey. So as the winds subsided and on a grey heaving sea and sky, scratched in charcoal marks by ganets (of the less glamours kind) and albatross blown in from a storm, they sailed back to the City. While the weather remains reckless and foraging skills still wanted it was time they realised (it had taken them a month) to go back to work. Skills of a seamanship and hunter gatherer kind can always be improved in the warmer months… 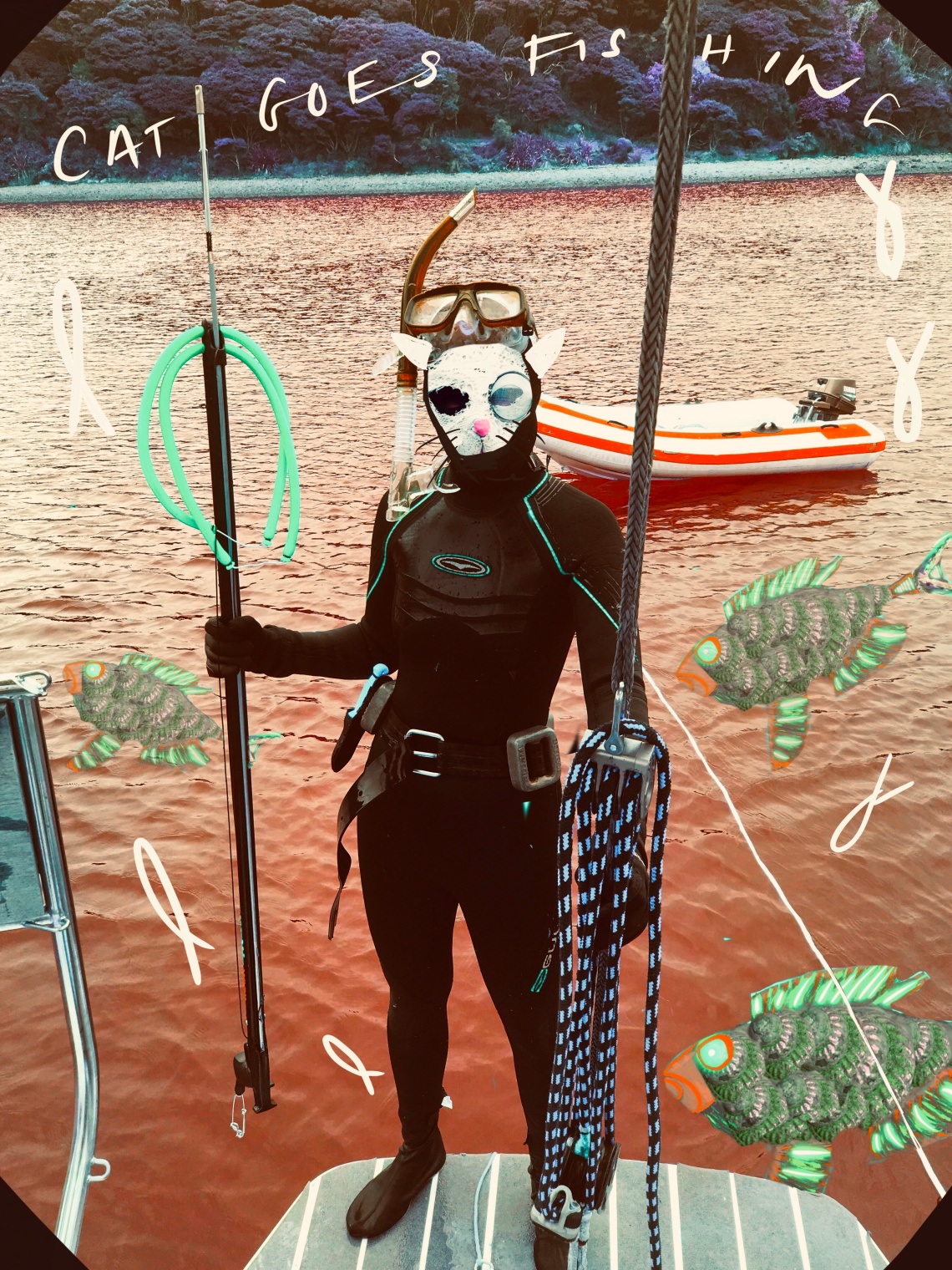 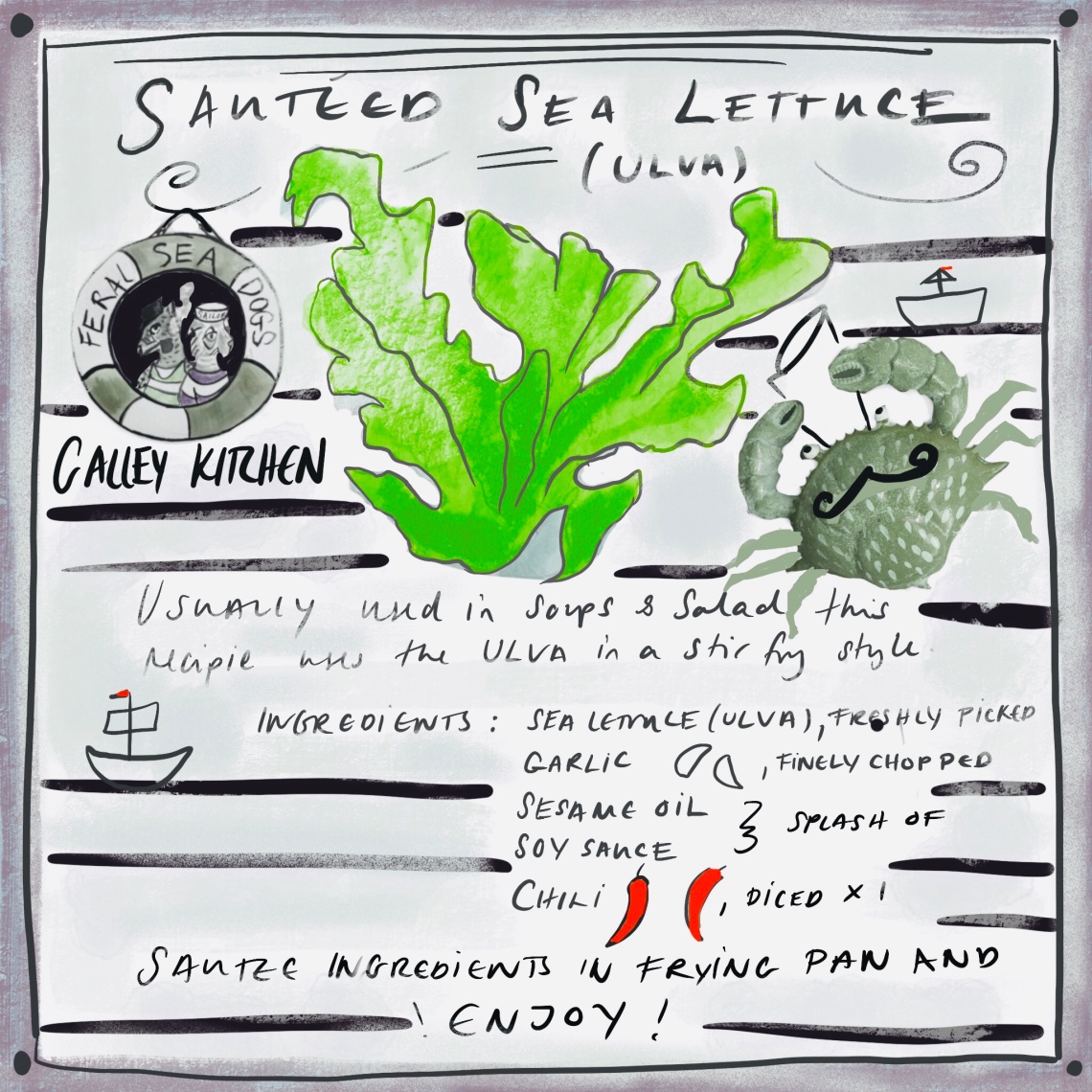 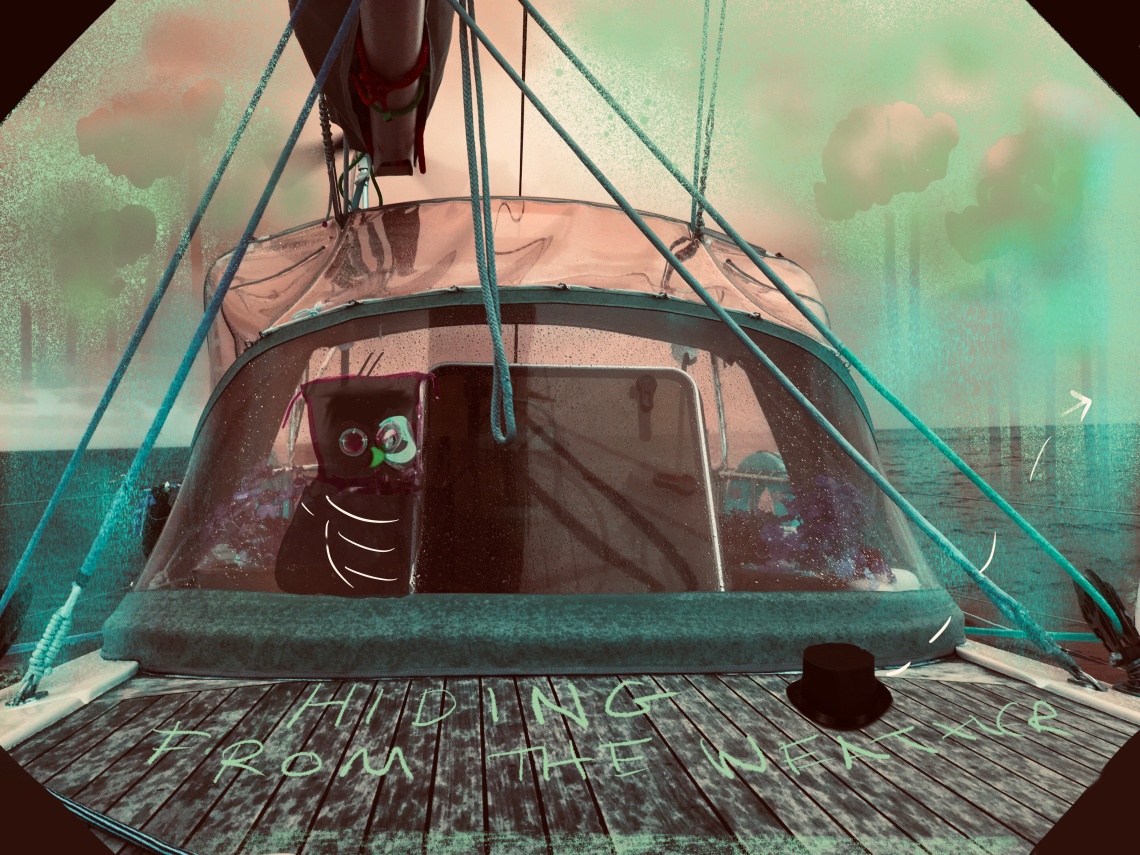 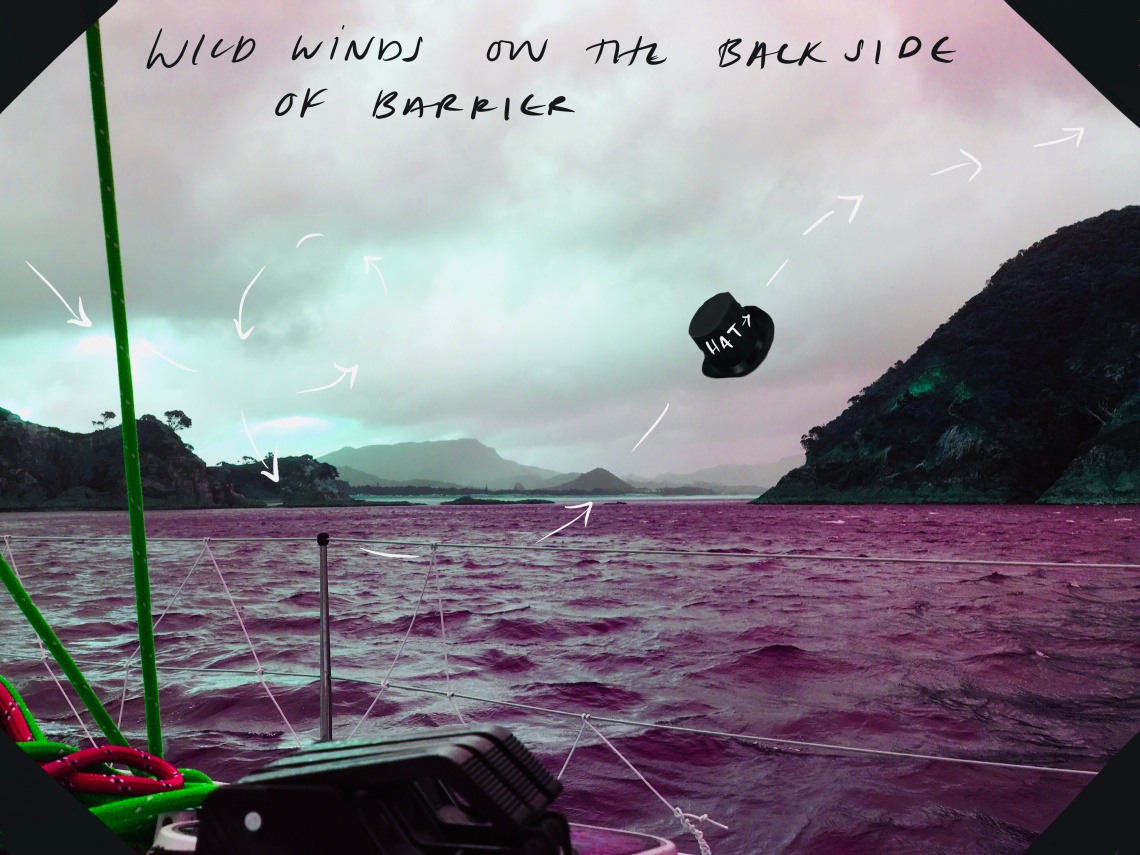 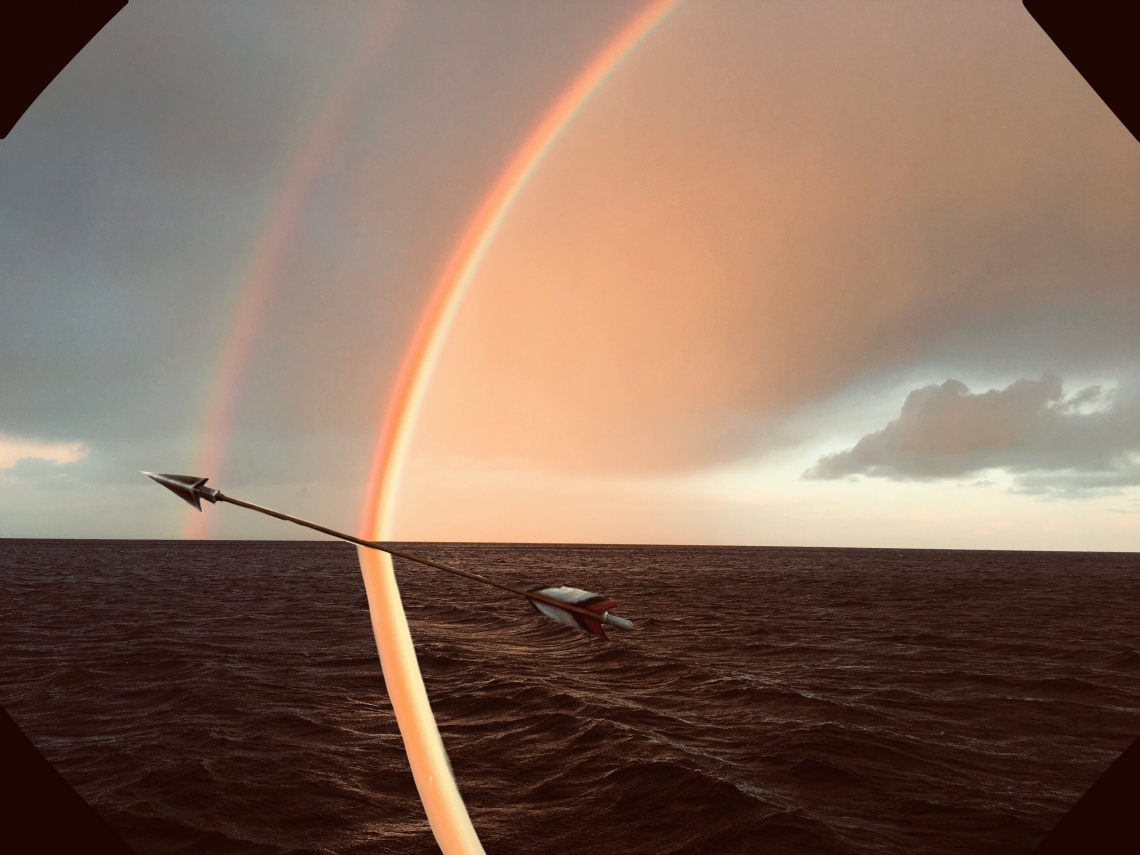 View all posts by sarahjaneblake

A gallery of sights, findings and nonsense 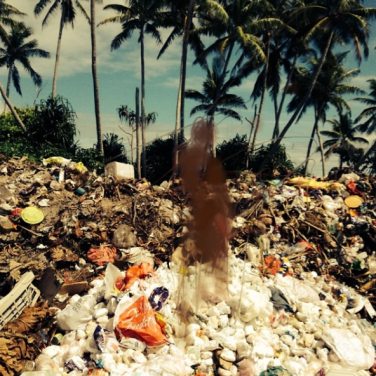 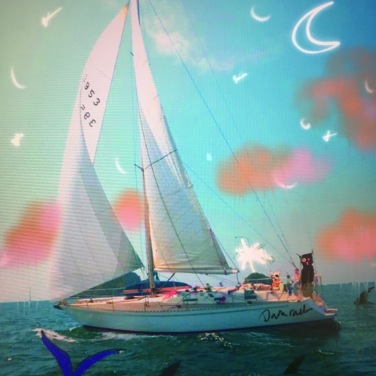 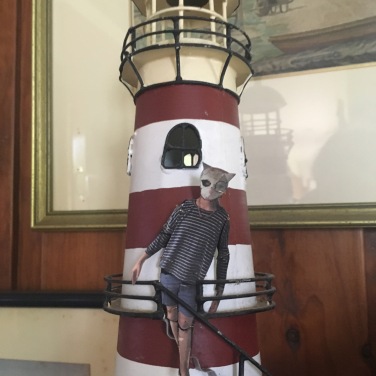 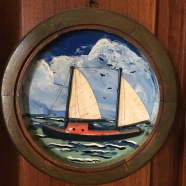 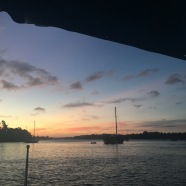 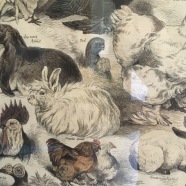 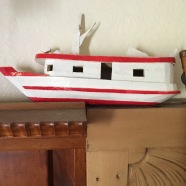 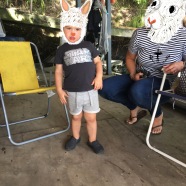 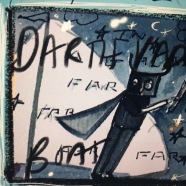 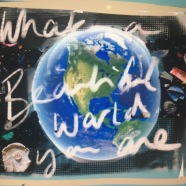 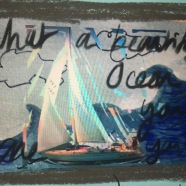 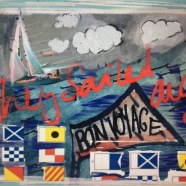 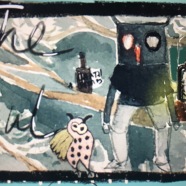 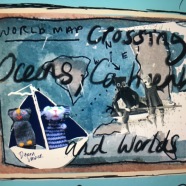 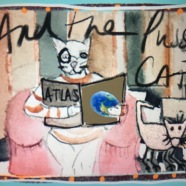